History of the Port 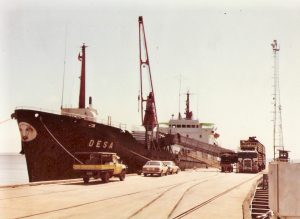 The Port was established to service the East Kimberley cattle industry pioneered by the Durack family and other early settlers of the region. It was gazetted as a Port in 1886, with vessels berthing at a jetty at Anton’s Landing – the remains of which can be seen at low water at the northern end of Foreshore Drive near the Wyndham Museum.

In 1917, a new timber jetty was built on the site of the current jetty to service the newly opened meat works. This jetty was positioned to make use of a natural deep water basin to allow for larger, deep draft ships. In the early 1970s, the current steel and concrete jetty was built to replace the original timber structure and the unique horseshoe shape was completed allowing the more efficient movement of cargo on and off the jetty.

Originally, a light rail loop was used to move cargo from the jetty to the meat-works and storage sheds, one of the original trains can be seen at the front of the port administration building. Up until the 1980s, frozen meat was exported from Wyndham to overseas markets. At the closure of the meat works in 1986, live cattle exports then became a key trade for the Port, with 10% of Australia’s live cattle exports passing through the facility. The cattle are sourced from the various cattle stations in the East Kimberley and are exported mainly to Indonesia, Malaysia and the Philippines, along with some shipments to the Persian Gulf.

Since the days of European settlement, Wyndham Port has played a major role in connecting the East Kimberley to the outside world. In the early years, when road transport was non-existent, the only way to get people or goods into the area was by ship. Stateships, the government owned shipping line, operated a regular service from Fremantle to Wyndham from 1908 to 1995. This was replaced by a government-subsidised service, which was since discontinued in late 2013. 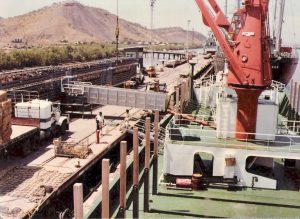 After over 100 years of government control, in 1999 the operation of the Port was awarded to the Ord River District Co-operative Ltd. Shortly thereafter (in response to a restructure and reform of ORDCO), CGL took over the Port management contract under an operating agreement with the now-Department of Transport, Western Australia. This contract has since been extended through until June 2021.

The export of sugar initially was a key trade for the Port during the 1990s and 2000s. This shipping activity has ceased with the demise of the Ord sugar industry in 2007. A joint commitment from the State and Commonwealth Governments to facilitate a genuine expansion of the Ord River Irrigation Area has since seen the return of broadacre crop exports through the Port. 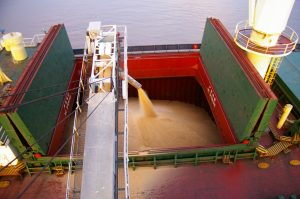 Corn being loaded into a vessel at the Port

By 2004, The Port begun to see further increases in secondary industry products and supply chain services. The opening of a major nickel mine near Halls Creek Western Australia saw 100,000 tonnes of nickel concentrate exported to China every year from the Wyndham facility. Nickel exports did cease however for some time in response to downturns in the mining industry during the late 2010s, but the Port has seen this major export activity return to the Wyndham shipping facility in 2019. 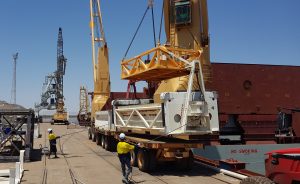 In 2013, the Minister for Transport announced the details of a strategy to reform the management of ports across Western Australia through the establishment of 5 Port Authorities (Fremantle, South West, Mid-West, Pilbara and Kimberley). The establishment of the Kimberley Ports Authority was scheduled for 1 July 2014, with a staggered takeover from the Department of Transport in Fremantle. This new localised Authority will provide oversight for the ports of Broome, Derby, Koolan Island, Cockatoo Island, Wyndham and any new ports developed in the region.